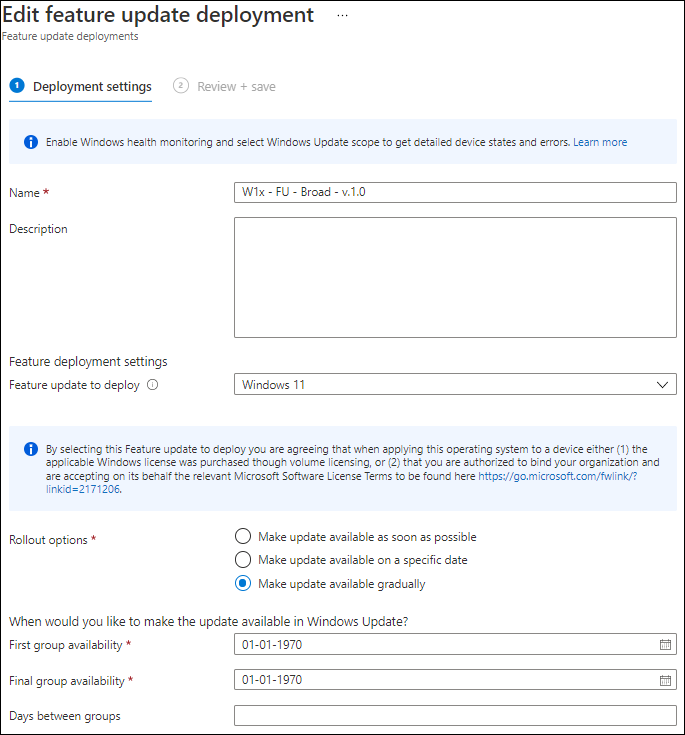 Some of the updates are related to who we can gradually rollout to Windows 11, which is reflected in the following released items:

New scheduling options for Feature updates for Windows 10 and later

When Windows 11 was released, I already posted a short blog article about whether devices would be automatically updated when using the Update ring functionality. In that same article I also referenced to the following article giving a glimpse of what was coming: Endpoint Manager simplifies upgrades to Windows 11 – Microsoft Tech Community

So let’s go through the released items and see the new options we have available to streamline the rollout of Windows 11 within our Modern Workplace environment.

The Safeguard holds which are currently applicable can be found on the Windows release health documentation page, which is available via the following link: https://aka.ms/WindowsReleaseHealth

If you have Update Analytics Configured, there was already a predefined query to check for devices with safeguard holds. There is also a Workbook available called Update Compliance – Safeguard holds

The query provides a list of devices holding a Safeguard Hold, in the result of the query you can find the DeploymentErrorCode which you can use to look up the issue on the Known issues and notifications page, and in this case the error translates to: Compatibility issues have been found between Oracle VirtualBox and Windows 11

If you don’t have update analytics configured, you can also use the Feature update failures report, which is available under the Software Update section under the Monitor option in Microsoft Endpoint Manager. Before you can use the report, the Windows updates scope within Windows Health Monitoring must be configured though.

The following screenshot is borrowed from the Microsoft documentation page, and as you can see in this specific example the upgrade couldn’t continue because there was not enough disk space available on the device.

Besides these 2 methods, there are other reports available as well, might be a topic for a future blogpost.

After the recent changes we now have a lot more options available to configure, as shown in the screenshot below

By default the option “Make update available as soon as possible” is selected, which provides the same experience as the old configuration option. We now also have the following options:

The make update available gradually option allows you to define a time range, after which Windows update will create a subset of the devices which are targeted in the policy. These subsets are called “Offer groups”, and Windows update assigns devices to these “offer groups” randomly, keeping the groups evenly-sized. The rollout will be load balanced in order to reduce the network traffic.

You can specify when the First Group must be offered the update by specify the First group availability date, this date must at least be 2 days in the future from the moment that you configure the value. By doing so, Windows update identifies the devices, define the offer groups and assign the devices to those offer groups.

By specifying the Final group, you specify the date that all remaining devices which didn’t receive the offer yet are offered the update.

By specifying the Days between groups, Windows Update can calculate the amount of offer groups to create, since it knows the amount of devices, when to start and when to end.

Changes to the Update Rings

The options available within the Update rings have also changed, the first option added is “Upgrade Windows 10 devices to Latest Windows 11 release”. The setting is set to “No” by default, but when set to Yes devices in the applicable deployment ring will update to the latest release of Windows 11. You could for example use this option, after you did a pilot using the feature updates functionality, enabling the “Upgrade Windows 10 devices to Latest Windows 11 release” option per deployment ring to rollout the remaining devices within your organization.

What also changed is that the “Servicing channel” option is now removed, and replaced by the option “Enable pre-release builds”. If you enable this option you can choose between the following pre-release build options:

By making this optional within the Update ring itself, by default the correct servicing channel is now configured, which makes more sense.

Some welcome additions related to deploying Windows updates to your modern workplace devices if you ask me. Make sure that you properly prepare before you start the rollout of Windows 11. Start with understanding which devices are eligible for an upgrade, by using the Work from Anywhere report as part of Endpoint Analytics. Then start with a small pilot using the Feature Updates functionality. Once you feel that you are in control, you might leverage the options in the deployment rings to use your normal rollout mechanism to deliver the Windows 11 update.

Want to know more about how to configure your Windows Update for Business (WUfB) settings, then I invite you to read the following article as well